What Is Load Shedding And How Can It Extend UPS Battery Runtime?

Load shedding is deliberately reducing the total load placed on a device or network. With uninterruptible power supplies, prioritising which loads power down in which particular sequence when the mains supply fails can help to maximise the amount of available battery runtime.

This process is also known as a priority-based shutdown. Divide all the loads protected by the UPS into groups, for example, A, B and C – category ‘A’ loads are those that must be kept running on battery for the longest possible time, while group ‘C’ will need the shortest (as outlined in the image below).

For example, a local file server only requires sufficient backup to safely shut down, while a Private Branch Exchange (PBX) supporting critical servers will need to be kept running as long as possible. 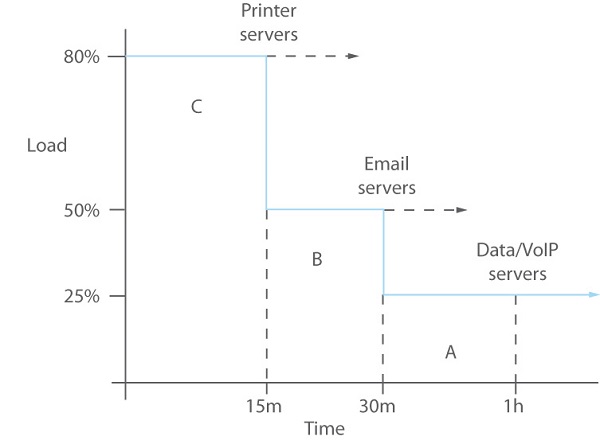 During an outage, as the hardware is powered down according to the pre-defined sequence, the load reduces on the UPS, which in turn increases the available battery runtime for the remaining equipment.

Load shedding is common practice to manage potential downtime on networks where there are multiple servers or equipment clusters that need protection.

There are three ways to achieve such a priority-based shutdown: